Nokia needs to be exciting and more aggressive in the future

Device Manufacturers As Mobile Operators – A Necessity Or A Recipe For Disaster?
21 January 2011
Nokia talks strategy – Part 1: Possibilities
04 February 2011
Tech
Nokia needs to be exciting and more aggressive in the future
28/01/2011 by Ville Aho in Tech

Nokia Q4 2010 numbers are finally out, and it isn’t pretty. You would think that a growth of 7% in a quarter would be a sign of relatively good performance, at least decent. But when the industry as a whole grows by 25% and some of your closest competitors by 30% or more in a single quarter, you are in trouble.

Steven Elop the CEO of Nokia said yesterday that: “The industry changed. It’s time for Nokia to change faster.” For some reason doing anything fast or even at somewhat rapid pace seems to be a complete mystery for Nokia. The industry changed January 9, 2007 when Apple introduced the iPhone. It’s been over four years and Nokia hasn’t yet been able to introduce a serious contender. I bet that without Google and Android the situation could be a lot different. Many companies such as Samsung didn’t have a valid smartphone strategy before Android, which was a gift from heaven for many other companies as well. HTC would most likely still be toying with Windows Mobile, which never really took off. Not forgetting Motorola that was on the verge of bankruptcy before Android came to the rescue. The industry has changed, but Nokia hasn’t and that is the problem.

Lao Tzu said that: “The biggest problem in the world could have been solved when it was small.” This applies to Nokia as well. We had to wait for October 2008 for the first touch device, which offered nothing compared to the elegance of the iPhone. Nokia was still concentrating on features and hardware rather than software. And was downplaying the iPhone, which at the time didn’t have MMS, 3G, GPS or even apps.

Nokia is an exceptional company. Established in 1865 as a pulp mill it has come a long way. Nokia has had to reinvent itself countless times before. Yet, the change that the company is currently undergoing does not seem to be going too well. Nokia keeps drawing great pictures of better tomorrow and introducing new strategies but with no visible results. Why is it so hard? What’s taking so long? Nokia has one of the most talented people in the world working for it and an amazing history filled with success stories. Shouldn’t this be enough?

Nokia had high hopes for the N8. This was supposed to be the device that could finally match the mighty iPhone. And it is, hardware wise. Symbian^3 might very well be the most advanced mobile operating system under the bonnet. But that information is only valuable to people like me, geeks. And as we have seen quarter after quarter this information, as unfortunate as it is, does not sell phones. Apple changed the name of the game. Modern smartphones need to be exciting, desirable, trendy and most importantly sexy! And Symbian is anything but. In fact Symbian is like Toyota. Reliable, has all the required features and does what you would expect it to. But you don’t challenge Merceded with a Toyota and that’s why Toyota has Lexus. Nokia is in a desperate need of its own Lexus. Symbian needs to be pushed down to the masses but this can’t be done before there is something to replace it with. We all know what Nokia’s Lexus is but what happens if MeeGo doesn’t deliver? 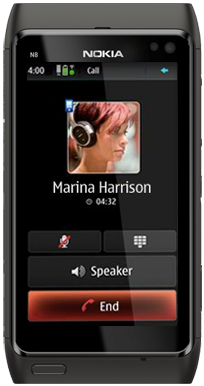 I believe that the answer would’ve been Maemo. In many ways Nokia already had the user interface to rival iPhone and Android in 2007 when they introduced N800. Why Nokia chose to go with Symbian as their touch based OS instead of something that was specifically designed for touch input is beyond me. Especially when OS2008 was already based on Linux just like iOS (Unix), Android and the upcoming messiah, MeeGo. It is true that OS2008 wasn’t ready for a smartphone use as it was, but it could have been developed. And it was. Maemo 5 was released in 2009 together with N900. This was not an Internet tablet like N800 had been but a true smartphone. However, Maemo 5 and N900 were never marketed as iPhone/Android competitors. Why not? Quickly after the introduction of Maemo 5 Nokia introduced their plans to skip Maemo 6 and to merge its development with Intel’s Moblin project. We’ll have to wait for a proper unveiling until we know how this turns out. However, it seems that MeeGo will be missing the party at least for the first half of 2011. This does make you wonder why Maemo 5 was canned so quickly? Couldn’t it have been developed using a continuous development model that would lead to MeeGo whenever it is ready? Introducing N8 with slightly improved Maemo 5, would have been a much more exciting thing to do than to release it with Symbian. At least it would have given the critics, media, fan boys and bloggers something to nibble and talk about until MeeGo arrives.

Nokia declared last summer that: “The fight begins now!” But then nothing happened. N8 was delayed, the promised Symbian^3 updates are still not here and E7 hasn’t even been released yet. Maybe with some Maemo love they would be in a better situation.

Nokia does not have to make miracles. At least not yet. I have listed here few examples that I would like to see Nokia address in the near future.

February 11 will be an interesting day for anyone who’s interested in Nokia. That is when Mr Elop will talk about future strategy and hopefully introduce more information about MeeGo. Until then we will just have to wait, which unfortunately has been the name of the game for too long.