Looking back to 2007: Nokia acquires Navteq in order to protect its strategy

Nokia, the largest mobile device manufacturer in the world, announced 1 October 2007 that it would acquire the worlds biggest digital map information company Navteq for a purchase price of approximately $8.1 billion (EUR 5.7 billion). This is still the biggest acquisition in the long history of Nokia. Table 1 and figure 1 illustrate the key facts about Nokia and Navteq at the time of the acquisition.

Table 1. Situation before the merger at the end of 2006 in US dollars

According to Olli-Pekka Kallasvuo, President and CEO of Nokia at the time: Location based services are one of the cornerstones of Nokia’s Internet services strategy. By acquiring NAVTEQ, we are ensuring the continued development of our context and geographical services through Nokia Maps. The Credit Rating Agency Standards & Poor’s reported at their Equity Research at 2 October 2007 that they saw the logic behind the company’s action but that they also saw it as a defensive move in anticipation of slowing handset sales growth.

According to Navteq CEO Judson Green there are only two major mapping companies in the world. Navteq and its Belgian competitor TeleAtlas, which was just three months earlier, in July 2007, acquired by a Dutch device manufacturer TomTom. According to Green this acquisition put also Navteq in play, as it was now the only sole mapping company left in the world. Jussi Hyöty, head of research at FIM Securities thinks that Nokia indeed had to act fast: Nokia is in a rush…If they [Nokia] want to be a leading player, the company needs to make purchases. Wing-Yen Choi, an analyst at Theodoor Gilissen in Amsterdam, seemed to be agreeing with this theory, but admitted that besides Nokia wanting to secure a supply of maps through the purchase another motivation might have been to prevent Navteq from being acquired by a competitor. Navteq CEO has later admitted that the company had also been in talks with Google, Microsoft and Garmin about an acquisition.

After the announcement of the acquisition Nokia shares dropped 0.49 Euros or 1.8%, to 26.17 Euros in the Helsinki Stock Exchange, as investors balked at the asking price. This is a very high valuation for the U.S. company, so yes, this is a high price to pay…But navigation is a hot area and fits well with Nokia’s strategy said Mats Nyström, an analyst at SEB Enskilda Bank in Stockholm. Standard & Poor’s agreed with the steep price but considered it to be on a comparable level to the bid for TeleAtlas – regardless the agency kept its “sell” recommendation for the stock. Navteq fell 2%, or $1.52 and closed at $76.45 at Wall Street. A slight fall considering that Navteq stock had gained about 80% during the previous three months due to a speculation about the company being an acquisition target.

After the acquisition Navteq was set to operate as an independent subsidiary and to continue to serve its existing customers of whom some are major competitors to Nokia. The CEO of Navteq reports directly to the President & CEO of Nokia. Navteq’s operations remain in Chicago and no other major organizational changes were made. The financial situation of Nokia and Navteq at the end of 2009 is shown in table 2.

Navteq’s operating profits are down 125% since 2008 but as can be seen from table 3 net sales are up by 41% year on year. This suggests that demand does exist but the company hasn’t been able to turn it into profits. Quarter on quarter sales both for the group and Navteq are similarly down, which is most likely due to overall bad market performance.

*Change in net sales at constant currency excludes the impact of changes in exchange rates in comparison to the reporting currency Euro.

Figure 2 shows the Nokia stock price against OMX Helsinki index. It seems that the economic downturn has affected Nokia and the OMX index in a similar fashion but Nokia is taking longer to recover.

Yet Navteq is still such a small part of the Nokia Group that it is safe to assume that the negative progress of the stock price has more to do with the economic situation and growing competition than the Navteq acquisition. Although the earnings per share have come crashing down since 2007 the company has kept the dividend per share almost at the same level. This suggests that the company is not pursuing higher-than-average growth but is instead sharing the earnings with the shareholders. Dividends displayed in figure 10 are also a good signal of the company’s real state of business. 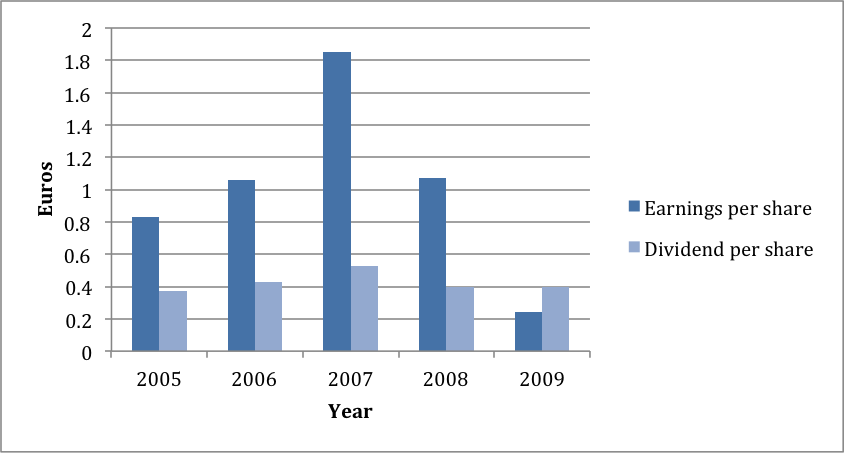 As mentioned earlier the economic downturn has partly affected the drastic decline of the stock price. On the other hand Navteq itself has been heavily hit by the fears decline in the automotive industry. This makes the analysing of performance by financial measures very difficult. Fortunately for Nokia it seems that the reasons behind the acquisition where not merely financial. According to Gartner analyst Thilo Koslowski the judgment is still out there: It’s still too early to say whether investments paid off…We probably have to wait another 4-5 years before we will see significant takeup of these [navigation] services. At least the strategic goals set by the CEO seem to have been achieved.

According to Nokia’s Rick Simons, former Executive Vice President of Devices Unit, the Navteq acquisition was a part of the company’s strategic transformation away from being just a hardware manufacturer to also being a software company. As a part of this process Nokia established a new Solutions Unit that started operations in October 2009. 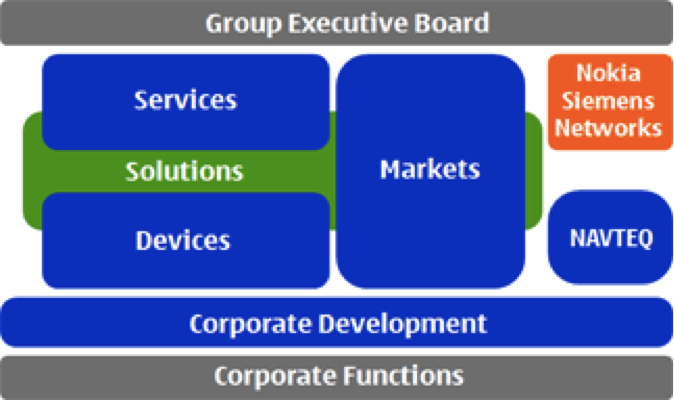 According to the company’s press release: The Solutions unit will drive Nokia’s solutions offering and align it with the company’s devices and services portfolio. This marked the fourth major organizational structure change in the company’s recent history. Nowadays Nokia is in a constant process of renewal or as Pekka Ala-Pietilä, a former President of the company put it: Five to 10 years ago you would set your vision and strategy and then start following it. That does not work any more. Now you have to be alert every day, week and month to renew your strategy. To Nokia, change can be said to be part of its identity.

The importance and achievements of the new Solutions Unit became even more evident in 11 May 2010 when the company introduced once again a new organizational structure where the role of the unit has been accentuated even further. 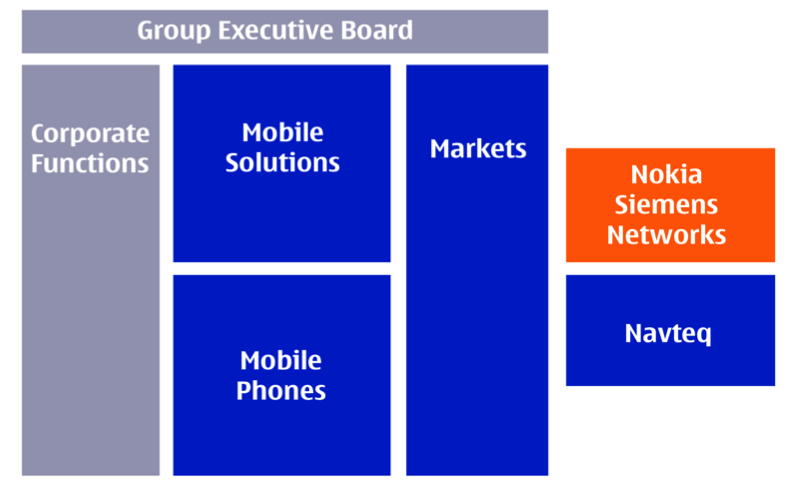 At least one thing is for sure – Nokia as a company has proven time after time to poses the ability and readiness to be constantly learning and renewing itself. As the history shows the company is also eager to act upon this ability. This suggests that the resistance against change in the company has to be somewhat low. This outcome is also supported by the current management approach used at Nokia, the ‘Nokia way’, which emphasizes the speed and flexibility of decision-making in a flat, networked organization. Continuous learning is at the heart of the Nokia way and a result of top management’s genuine commitment towards it. This is endorsed with a high number of job rotations that take place at all levels of the organization – including the top management. Indeed, the organizational change announced in 11 May 2010 also came with news of rotation of the top management.

To Nokia change has proven to be the key to success. History shows Nokia to be a very strategically aware and wisely led organization that relies on its workforce as the ultimate resource. The company seems to be in constant transition state forced by the complex and fast moving environment it operates in. Nokia has seemingly turned this into an advantage that it uses to endorse constant learning both at the individual and corporate level. The Navteq acquisition is a good illustration of the company’s ability to make far-reaching proactive decisions even though they might not turn profitable right away or never. Nevertheless it marked the beginning of transformation into something new. Based on the research it is possible to conclude that the company seems to be able to fine-tune its strategies or even completely change direction if necessary. However as mentioned earlier organizational change is useless unless all parties are ready to commit to it and Nokia seems to be able to do just that.

And if the company’s long-term rivals are to be believed Nokia should never be taken lightly: Never underestimate the Finns says Carl-Henric Svanberg, a longtime CEO of Ericsson. They may not come across as aggressive in their comments, but they are in their actions.